Once compared to Kobe Bryant whilst dominating competition on the amateur circuit, Shabazz Muhammad is a creative, offensive-minded wing with an unorthodox scoring attack; normally utilizes floaters, post-ups and midrange J’s to get buckets rather than deep jumpers, though his three ball is slowly but surely becoming more effective; good leaper; ‘throwback player’ – Shabazz would fit right into an era like the 90s by barraging teams with a gauntlet of moves in the midrange area; on the NYPS (Nick Young Passing Scale, a measure of how inefficient one is at registering an assist), Bazz consistently ranks in the top percentile – avg. less than 1 dime/game for his career; “microwave” potential under Thibs?; Minnesota’s undisputed X-Factor 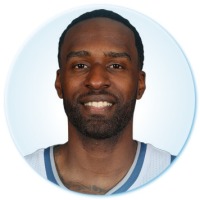