Michigan’s Nik Stauskas is slowly proving (to others) he can play in the league; a former 2014 lottery pick, Stauskas is a shooter who is beginning to make shots, has earned some no-doubter minutes in Philly; a true rhythm guy, Stauskas can get buckets when he’s in a groove and knows consistent PT is coming his way; shouldn’t be pigeonholed as a specialist – 1. he’s not there yet in general, 2. Nik can put the ball on the floor and score moderately well – nifty finisher, loves reverse lay-ins, sneaking by for cuts; has a long way to go to consistently defend wings; OK playmaker* – needs to work on making the extra pass; in Philly’s long-term plans? 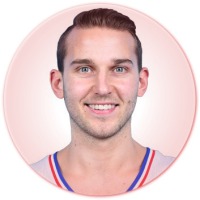