Metta World Peace is back for one more year in Laker Land! – this time, he serves as a mentor and veteran presence for younger forwards like Julius Randle and Larry Nance Jr.; a bulldog type of competitor, Peace continues to compete on the defensive end despite obviously losing a step athletically; physical: the type of guy to knock you on your ass, just to see how you’d react – one of the realest ‘tough guys’ we’ve seen in the past couple decades; in 2017, MWP won’t provide much other than toughness and random outside shooting on the court – off the court, he’s fully accepted a mentorship role: is Metta a future coaching candidate under Luke Walton? 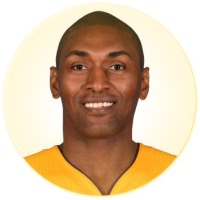