Markieff, the elder (Morris Twin), specializes in faceup scoring and long-range shooting (sort of, he only shoots about 32% from long range); more of a shot-taker than shot maker, Morris is a ‘heat it up’ scorer, especially from the mid post area – elbow step backs, turnarounds & straightaway 3s are a few of Keef’s signature shots; should get down on the box more – strong, doesn’t need to play exclusively w/ his back to the basket but Keef’s mid-post success should translate to the paint; struggles to consistently defend and has had well-documented run-ins w/ previous coaches and teammates; when Keef’s head’s on straight, you’re looking at a matchup problem, hybrid forward – basically what his brother Marcus is for Detroit; a starter under Scott Brooks, Keef broke out in 2016-17, returned to Star UnderDOG status 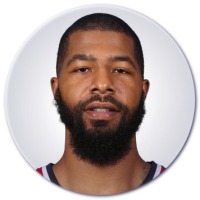