Marc Gasol is a top 5 center in the NBA, can’t deny it!; fully evolved into a Top DOG during the 2014-15 season, in which he started opposite his brother, Pau (SAS), in the All-Star game; arguably, the best passing pivot in the Association today – Marc’s excellent court vision is advanced for his position; one of the league’s top defenders: kinda plays that end similar to Tim Duncan* – beats his man to the spot, stays patient and reaches out for swats at the perfect time; ‘catch & spin’ move is one of Marc’s go-to’s (same for Pau!) – Marc catches guys off guard w/ his speed, finishes w/ a soft touch; Coach Fizdale’s guards must make sure Marc stays in rhythm – Gasol gets it going fast in the PnR; such a tricky faker** – if he gets ya, Marc chooses to either drive the lane or cash his patented set shot; a former DPOY & current low post star, Marc is Memphis’s undisputed franchise player – will they ever get over the (championship) hump w/ Gasol leading the way? 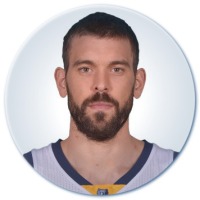