Steph Curry did one major thing last night but it was surrounded by a bunch of other smaller things wrapped into that one. The large thing you’ll hear about, and it certainly isn’t just a ‘thing’, is how Curry broke the single-game three point record last night against the Pelicans, splashing in 13 threes.

But after assessing last night’s game, it makes a lot of sense. The Warriors were coming off of a crippling loss dealt by the Lakers in Los Angeles on Friday night. Curry played terribly, losing his streak of 157 straight games with a three pointer made, missed all ten 3’s overall, and shot 29% from the field.

This type of response separates what makes the good from the great. Last night he shot 61% from the field, (76% from three!!!), scored 46 points, and still managed to grab 5 rebounds and dish out 5 assists…in only 35 minutes. Curry’s energy from the opening tip looked electric and the crowd could tell. Almost every three he made was incredibly difficult, often coming off curl’s with a player closing tailing him or a beautiful pump fake and setback in order to create the separation. Steph was clearly feeling it and was emotionally invested into this one.

Even better, players often like to pretend like they don’t know they’re on the brink of history but after Curry hit his 13th three, all his emotion came spilling out. He knew. And the fans loved it.

Of course Curry found the perfect way to demoralize the New Orleans Pelicans even more, dropping them to 0-7 and doing it in historic fashion.

“Nothing you can do about it. He was being Steph,” Pelicans all-star Anthony Davis said.

This win actually does a lot more for the Warriors’ psyche because as of late it seemed like this team needed a jolt to jumpstart their chemistry journey with all their new pieces. Don’t be surprised if a historic run by this team starts from this night forward. Although teammates and fans lauded the arrival of KD, it’s time for this team’s rightful owner to continue the heroics in his two-time MVP DNA. 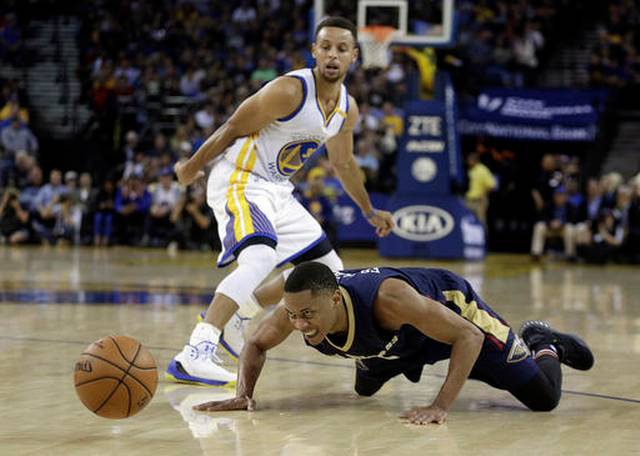 The Warriors were at their best last year when Curry played this electrifying, and once defenses started to load up on him, dishing out assists like an octopus. This is where swapping Harrison Barnes for Durant becomes more of a benefit than just giving the ball to Durant and hoping he does good things for you.

Curry now sits on top of the 3-point history throne, no longer having to share it with Kobe Bryant, and thank the lord, no longer with Donyell Marshall.

“That was quite a show. Not at all surprising the way Steph bounces back from bad nights,” Golden State coach Steve Kerr said.