Almost halfway through the 2015-16 campaign, let’s check in on a few, rookie floor generals and grade their progress! 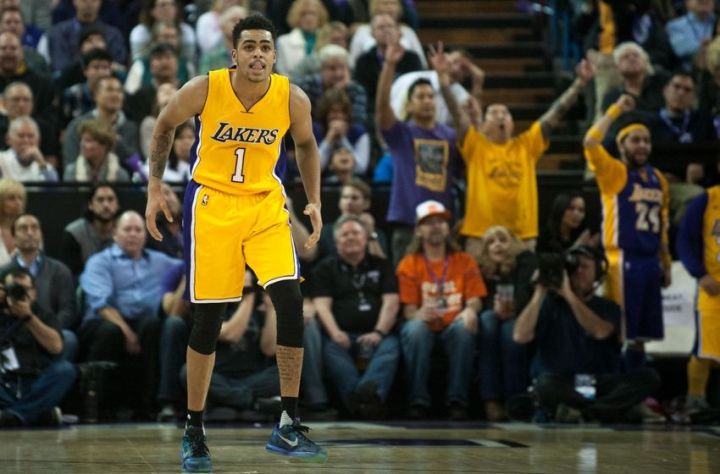 Out of the top three picks in the 2015 Draft, D’Angelo’s had the roughest time in terms of minutes and an unrefined role. It’s a mild shocker since the Lakers were expected to struggle (and have…mightily) but you also have to consider Byron Scott’s old-school mindset – a preference of playing more established vets in favor off rooks.

Coach Scott’s mishandling aside, Russell is beginning to show glimpses of his crazy upside. He’s creating action in the second unit and is running with Larry Nance Jr. & Julius Randle.

Russell’s game is also opening up more from outside, averaging at least 4 attempts/night over his last few games. His quick, lefty release yields easy opportunities to launch – Russell doesn’t need time to get shots off and is comfortable using a screen or if the defense is lax. Opposing teams are still daring him to shoot and he’s finally making them pay!

If you look at his stats without reading much into them, an average grade of a C+ is appropriate, considering his lofty standing as a highly touted prospect for one of the league’s most visible squads.

However, D. Loading’s endured BYRON, the 20th and final season of Kobe Bryant, being benched over Lou Williams! late in games and being used as a decoy for the first month of the season. Despite ALL of that, he still ranks 4th amongst rookies in scoring and is trending upwards.

Signature Performance – 27 points & 4 assists in a near-comeback victory over SAC:

Emmanuel Mudiay, Denver’s PG of the future, has experienced and up and down year. He looks like the real deal when it comes to penetrating the lane and creating scoring chances but has a long way to go as a shooter and finisher around the basket, as well as taking care of the rock (averages 3.9 TOs/game)!

Despite shooting only 32% on the year, Mudiay remains intriguing as a PnR scorer and half-court attacker. He really gets into the paint but has a tough time converting shots at the rim (shoots 42% less than 5 ft from the basket) and that’s a result of a lack of go-to moves/floaters.

But remember, not all young PGs are possessed with finishing ability – it’ll take a couple of years before Mudiay develops a real float game.

Mudiay is getting back into the groove of things after missing 14 games with an ankle injury. Since returning on Jan. 10, he’s re-earning his starting spot, which Coach Mike Malone did not “hand” back to him (could pay off huge in the long run).

As he gets more comfortable with Coach Malone’s system, expect more ups than downs the rest of the way.

Murray State’s Cam Payne joins the party after not receiving much PT for the first couple of months. With veteran DJ Augustin struggling to find a rhythm, Coach Billy Donovan made a sort of “QB-change” in the reserve unit, substituting Payne to spell his buddy Russell Westbrook for short stretches.

It’s really a testament to the rook’s work ethic…you know, being able to crack a rotation on a title contender in year 1. Instead of forcing the issue during mop-up minutes at the end of blowouts, Payne tries to approach each possession with patience.

Payne has looked great since playing extended minutes. With a “shifty” style as a PnR playmaker, Payne is learning how and when to make the right reads and look for his shot. Over the past ten games, he’s averaging 7.9 points and 2.6 assists on 46% shooting from the field.

Though it seems as if he’s earned a permanent spot in the rotation, Cam needs to work on attention to detail on D and avoiding over dribbling.

Other than that, let’s just say Payne’s been one of the biggest rookie surprises of the young season. But how will he help OKC heading into the playoffs?

Check back next time!

Raul Neto (UTA) – Has started 39 of 40 games for the Jazz in 2015-16. Shoots well from beyond the arc (38%) and competes on D but has not earned a great deal of responsibility as a PnR playmaker yet. That said, he’s proving himself as a floor general who takes care of the ball. Grade: C

Joseph Young (IND) – A scorer by nature, Young had his best game of the year at DEN last time out, tallying 15 points and 7 dimes. Minutes are hard to come by but he’s creating a solid rapport with fellow rook, Myles Turner. Grade: C

Jerian Grant (NYK) – A 2015 Draft sleeper, Grant finds himself in and out of Coach Derek Fisher’s rotation. His best game came against BOS on Jan. 12 (16 pts, 8 asts), where he stayed aggressive all night long. Grade: C

TJ McConnell (PHI) – An afterthought in the draft process, TJ has earned a spot with the Sixers as a bulldog defender and pass-first point guard. His iffy J needs polishing but McConnell has a sense of where to place passes (avg. 4.9 dimes/game, 2nd amongst rooks) for teammates. Grade: C+