Staving off elimination is no easy task. Down 3-2, here’s what the Chicago Bulls and Houston Rockets need to focus on to force a Game 7.

Control the Boards. Rebounding wins playoff games, plain and simple (the winner of the board battle has come out on top in each game this series). For the Bulls, corralling the 50-50 balls should be the main focus, as Tom Thibodeau frequently stresses how momentum dramatically shifts if you do not finish plays.

Throughout the series, there have been countless instances where Tristan Thompson and Iman Shumpert just “wanted” the ball more. It cost Chicago in the late stages of Game 4 and will do them in once again if Joakim Noah, Pau Gasol and Taj Gibson are bullied once again.

Welcome to the series. Both Aaron Brooks and Nikola Mirotic were important players off the pine for Tom Thibodeau. In the Semifinals, however, both have struggled mightily with defense and shooting. Seriously…Brooks got absolutely manhandled by Matthew Dellavedova (9 points, 9 assists) in Game 2. With the crazy offensive droughts Chicago is prone to, irrationally confident scorers like these two are vital. Brooks’s dribble penetration and Mirotic’s savvy foul-drawing skills have been largely absent.

The lack of scoring from them has been masked because of the contributions from Gibson and Mike Dunleavy Jr. but Brooks and Mirotic desperately need to step up. If Cleveland continues to get timely shots from JR Smith, Iman Shumpert, Matthew Dellavedova and James Jones, Chicago’s second unit needs to provide a strong counter.

Limit the “other guys” and bait “ISO Bron.” After 4 games of “containment,” LeBron finally had a breakout performance in Game 5 (38 points, 12 rebounds, 6 assists). Jimmy Butler actually played solid defense but once LeBron got going in the first, he applied that aggressive mindset the rest of the way. In Games 3 and 4, however, he was a combined 18-55 from the field and was awfully inefficient going 1-on-1.

Butler is adept at shading LeBron towards the help side defense but the Bulls, as a whole, have struggled rotating to shooters on swing passes.

Derrick Rose figures to have a nice game after being significantly outplayed by Kyrie Irving in Game 5. But if you’re Chicago, the onus should be on closing out on the perimeter to Smith, Shumpert and Irving, the main beneficiaries from LeBron (gracefully?) bulldozing his way into the lane and making pinpoint passes. That trio combined for 50 points and 6 threes last time out.

Establish Dwight Howard early and often…in the correct spots. In the first couple of games, Blake Griffin and DeAndre Jordan were effective pushing Dwight off the low block. Instead of catching the ball 6-8 feet away from the basket, DJ had success shifting Howard out around 12-15 feet away. Howard got some excellent looks in Game 5, with James Harden force feeding him down low.

Force the Clippers into quick shots. The “other” part of Lob City is what makes the engine run. Chris Paul is the “Distributor,” Blake and DeAndre are the “Finishers,” and JJ Redick & Jamal Crawford are the “Shooters.” Without the shooters, everything falls apart. 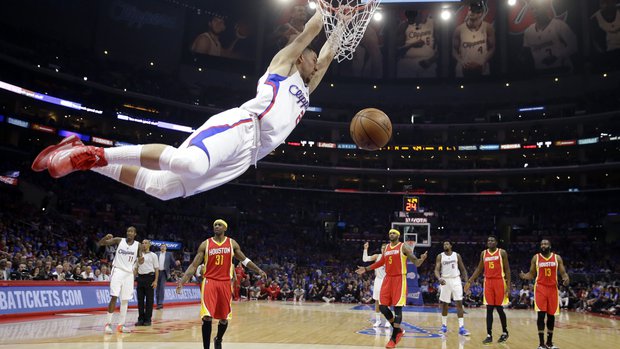 But when playing uptempo, LA is prone to taking awful transition jumpers with about 15-17 seconds on the clock. Crawford and Redick, as gifted as they are, are the main culprits. If Houston can get back on the break (limited LAC to 3 transition points last game; down from 22 in Game 4) and play air-tight defense on these two, CP3 will have less weapons to play around with.

Bench Production. A subtle, yet effective maneuver for Coach Kevin McHale was slotting Terrence Jones in the second unit prior to Game 4. Although Blake crushed Josh Smith, Jones is a more consistent offensive punch playing against the subs. Austin Rivers and Crawford are gonna get buckets (yes, Rivers is now a bucket-getter), so Jones needs to hone in on that end to avoid getting the axe.

He and Corey Brewer (another Star UnderDOG) combined for 25 points in Game 5 and got some easy opportunities playing alongside Howard and Harden (tallied a triple-double; 26, 11, & 10).

Now, these may seem as basic as Reggie Miller’s “keys” the other night but the fact is, forcing a Game 7 is always accomplished when teams shore up the little things. Because, let’s face it, if you are in a Game 6, you have already developed a winning formula against the opposition. If the other losses in the series were one possession games, like Chicago v. Cleveland, then only a handful of plays were the difference.

Attention to detail and controlling the pace HAS to be the priority for both Chicago and Houston. If not, both of their seasons end tonight.